I like Jon Ronson.  I never realised quite how fascinating a person he is until his recent appearance on the Richard Herring Leicester Square Theatre Podcast (RHLSTP!)

After that interview I started following Ronson on Twitter, and yesterday he appeared on my timeline with a series of tweets that move from curiosity to despair in under a thousand characters:

I don’t twig what “swimming” might infer initially, and I suspect that Ronson doesn’t either.  I’m thinking more along the lines of the “ooh look at that interesting eccentric” that pops into your head when you see an old man going for a January dip in the pool on Hampstead Heath.  But events become very dark very quickly.  And the narrative is very brief, even with the throwaway detail of the conversation about Steinbeck, and the now inappropriate interruption of a message delivered to a different audience in a different tone and for a different purpose.

Ronson’s decision not to stand and gawp is admirable.  We all tut at the rubbernecked voyeurs who slow down to pass the unspoken tragedy of a mangled car on the hard shoulder, but our tutting tends to be at its loudest when we’re being held back in a queue, and strangely absent when we take our own turn to pass by and stare with gory thrill and that sense of there but for the grace of a god that I don’t believe in…

Ronson takes the righteous path by walking away: there’s nothing he can do to help; there’s nothing anyone gains from his presence as a spectator.  And he leaves the story hanging.  Now laden with dark symbolism, it’s all over too quickly, and I feel guilty for wanting to follow the story to its conclusion. The writer walks away but I’m still peering back to work out what’s going. My curiosity is not sated. ”

“I’ve gone” bears incredible weight.  When do we ever say “I’ve gone”? “Gone” reflects the absence on a person or thing from the location and perspective of the speaker  “She’s gone” means she’s no longer here.  But it’s unfeasible to state “I’m not longer here”. With “I’ve gone” Ronson is both absent from and present at the scene. I read and I am there too, but not there at all.

When Ronson appears on my timeline again today I catch the final tweet in a sequence that contextualises and completes the story.  It’s heartbreaking and it’s eerie. And my timeline presents it to me in reverse, like an episode of Columbo: the brutal facts first; the background and explanation following piece by piece.  And this is not the author’s intention.  The medium is dictating the way I digest the message.  And again I feel guilty.  For all the heartbreak, I feel another thrill of the new.  I have never read a text in this way before.  And how often do we ever experience that? 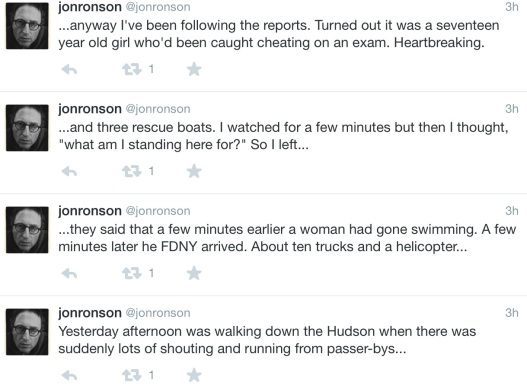 Ultimately, though, the message here renders the medium insignificant.  Ronson links to a newspaper article, again poignantly brief, telling the story in three paragraphs that quickly dissolve into isolated sentences.  The poor girl beside them, looking away.  Not returning our gaze.